A character’s arc includes when she enters and exits the story. Every character arc is a journey, and at the end of the journey, the character either succeeds at achieving his goal or he fails.

The moment a character enters a story, her character arc begins.

For a major character, put more emphasis on introducing the character and showing her goal(s). You either share the goal with the reader or make it an internal goal that will be revealed later. Either way, you as the author must know the goal.

For a minor character, write as little as possible and still keep the reader engaged and not confused.

When describing a character for the first time, describe the character so the reader:

At the end of the character arc, a reader should feel satisfied. Did the character achieve his goal? Did he fail? That’s up to you as an author to decide, but you must let the reader know.

Most likely, you’ll close the character arc for your protagonist and antagonist. It’s the other characters in your cast who might cause problems for you. Pay attention to characters who follow a subplot or hold the point of view for a scene. It’s easy to forget a goal or two.

The illustration below shows you how StoryTeller leads a writer through the process of evaluating plot and looking for plot holes related to character arc.

The along with the Story Arc, the Story Map in StoryTeller will show you many things about your characters. 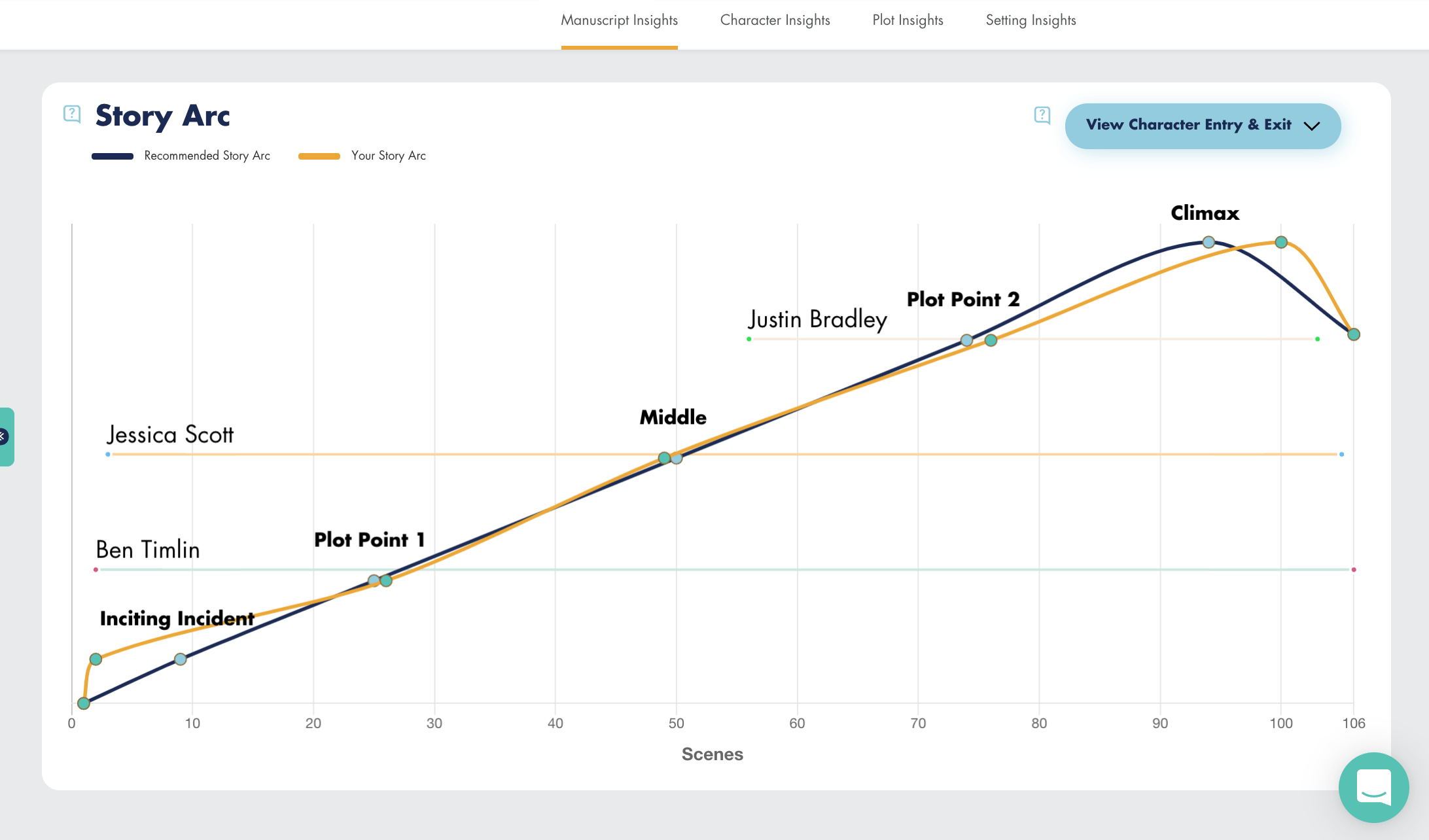 Let’s look at my novel Avalanche.

The Story Arc report can show you the first and last scene each character is in.

To do that, you need to know what the character’s goals were.

I suggest starting with any characters who have the point of view for a scene. You can quickly scan the POV characters and their goals by choosing the Point of View (POV) and POV Goal in the drop-down menu of the Key Elements per Scene report. This way you can find the important goals you must close off (succeed or fail).

Her first point of view scene in Avalanche is scene 13. I found this quickly by looking at the POV report. The bottom row shows each POV character by initials in the order they appear in Avalanche. 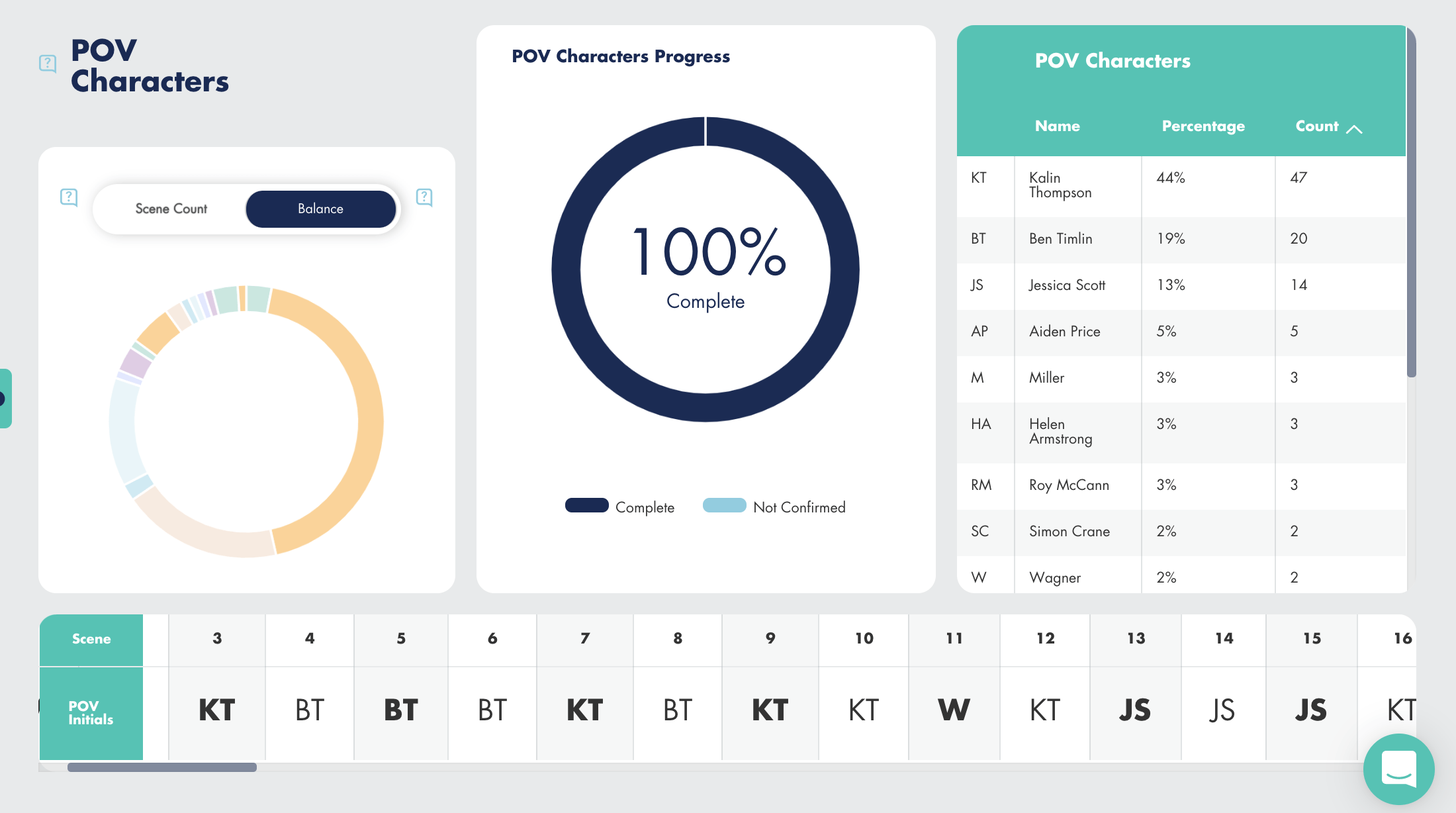 Next, find the last scene your POV character is in. You can use the Story Arc report to do this.

Below, you can see Jessica’s last scene is scene 105.

If I need to read the scene, I can click on the black box shown above, and the text of that scene will be displayed. I can then determine if I’ve closed off Jessica’s character arc properly.

​So now I know Jessica’s first POV scene, her goal, and her last scene. I can evaluate if I’ve closed off her goal by having her either succeed or fail.

I’ll repeat this for all POV characters and then move on to minor characters who don’t have POV for a scene but do have an important goal.

This takes a bit of time, but it’s worth it to create a better story for your readers.

Download our free eBook, Story Editing: 15 Key Elements of Fiction To Ensure Your Story Works and learn how story editing is all about evaluating the major components of your story.

14 Tropes about Writers: How readers see your ‘self’ in your writing

How does your writing fare against these writing ‘behaviors’? We can always see the writer through t...

The Importance of Failure

Failure will make your point of view character human. Failure will add tension to your scene. Failur...