Blog / Characters Per Scene Are Important

Blog / Characters Per Scene Are Important

Characters Per Scene Are Important

Knowing who is in each scene helps you control how the reader experiences not only the scene but the entire story.  Having a list of your characters per scene on a scene-by-scene basis gives a specific method for evaluating how you’re using the characters and shows you when you need to revise a scene.

It’s time to revise a scene if:

1. There are too many characters per scene

You don’t want readers to flip (or click) to previous pages to find out who a character is. Too many characters can cause this problem.

In StoryTeller you can use the Characters Per Scene report to see how many characters are in each scene.  Below, I’ve got 12 characters in scene 31. That might be too many, so StoryTeller is showing me I should check the scene. 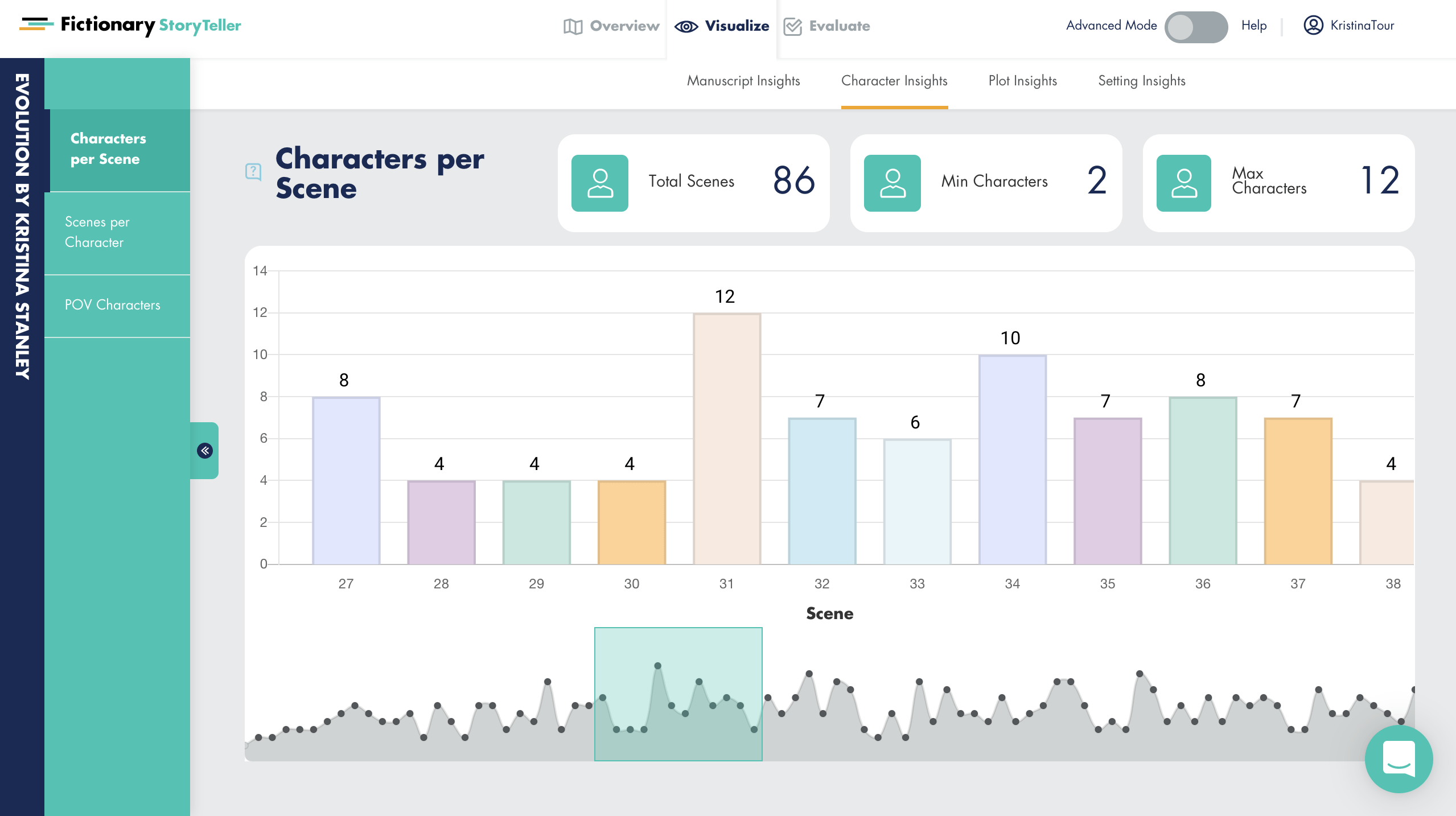 2. Characters appear or disappear without warning

If a character is in one scene and the next scene is in the same location at the same time, then either the character must still be there or the client must write the character exit.

By selecting the Characters element in the Story Map on the Visualize page, you can see who is in each scene. Seeing the Character element and Location element together keeps the story from having erroneously disappearing characters.

3. Protagonist and antagonist are not in key scenes 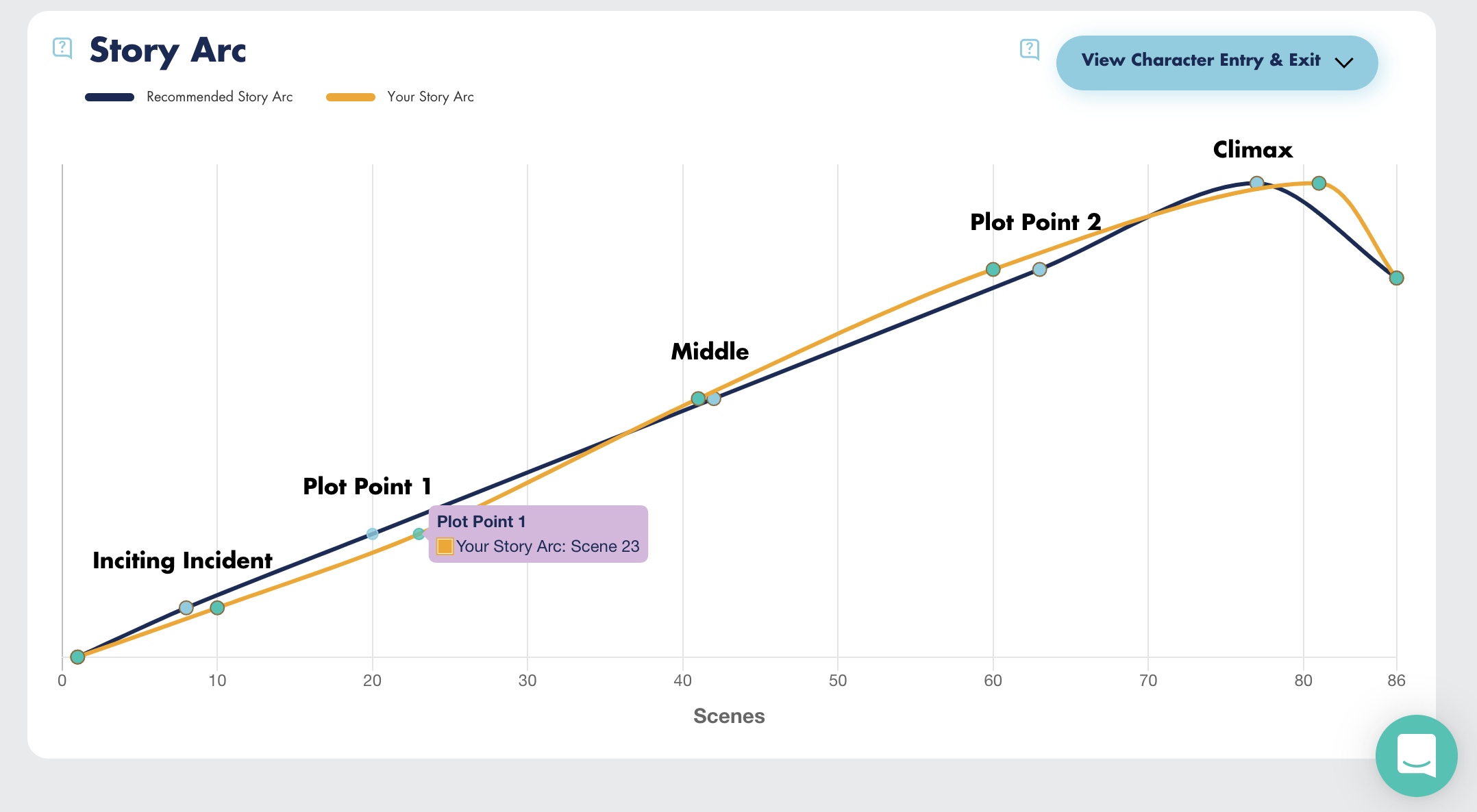 4. An introduced character lacks detail or has too much detail

The first time a character appears, they must be introduced to the reader. This is where you must determine what the right amount of time to spend on describing them and who they are in the story.

For a major character, more emphasis should be put on introducing the character and showing their goal(s).

For a minor character, write as little as possible but keep the reader engaged and not confused.

The Scenes per Character insight below shows me I should have a look at how I describe Patron, Olivia, John and Genie as all three are only in one scene. 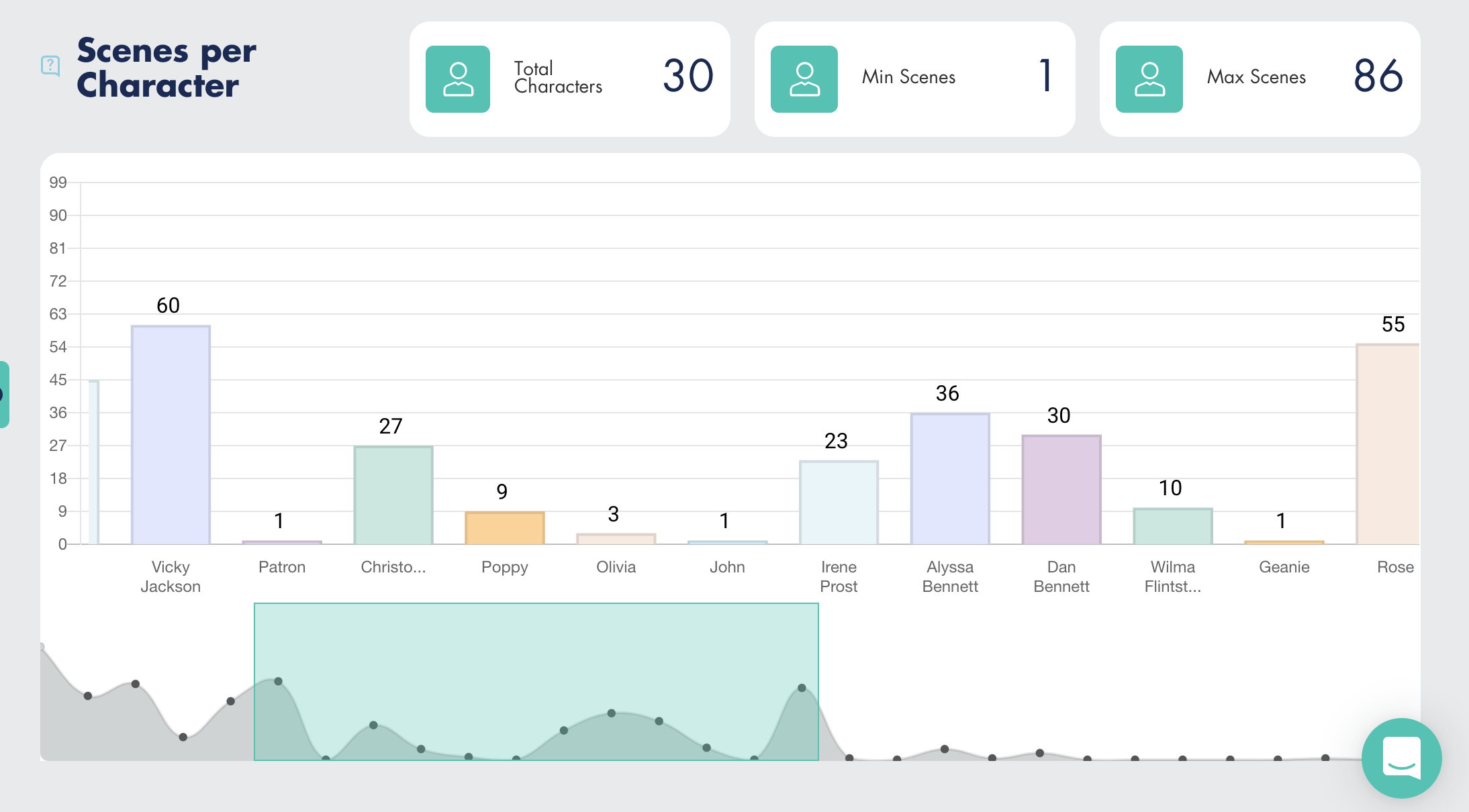 5. There are confusing names:

Once you’ve done a first pass at the story, the Cast of Characters will be accurate.  Review the names when listed together and look for names that would confuse the reader by having names that are too similar. You can recommend the client change a name if needed.

Below you see I have Daisy, Dan, Debi and Diana. These are all too similar, so it’s time for me to think of new character names. Daisy is a major character and her name relates  to the plot, so I won’t change her name. I can change the other three. I’ll keep in mind the other names in my cast of characters, so I don’t choose a similar name to an existing character. 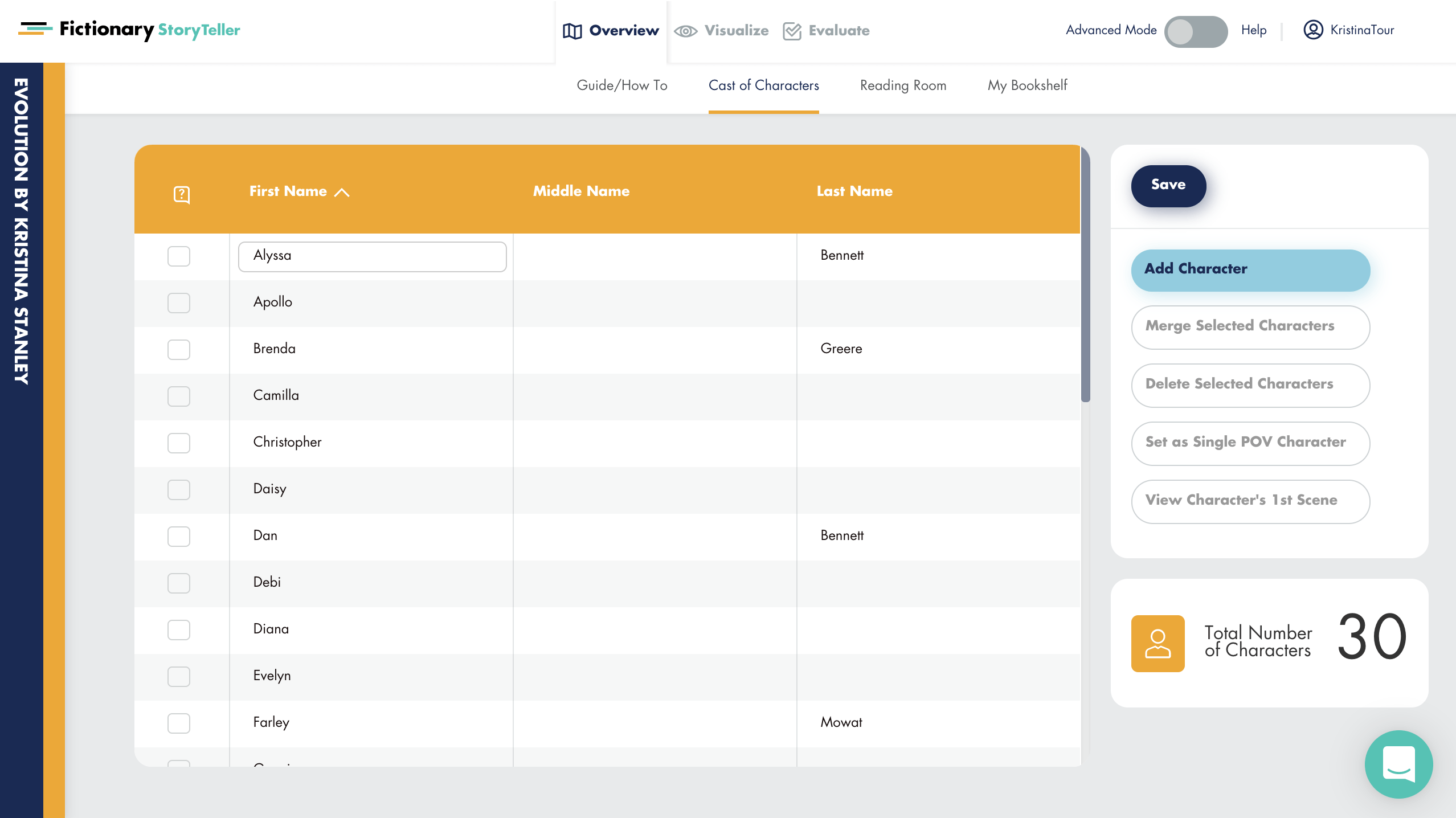 StoryTeller scans your manuscript upon import and links characters to scenes.

The following pop-up window will appear. 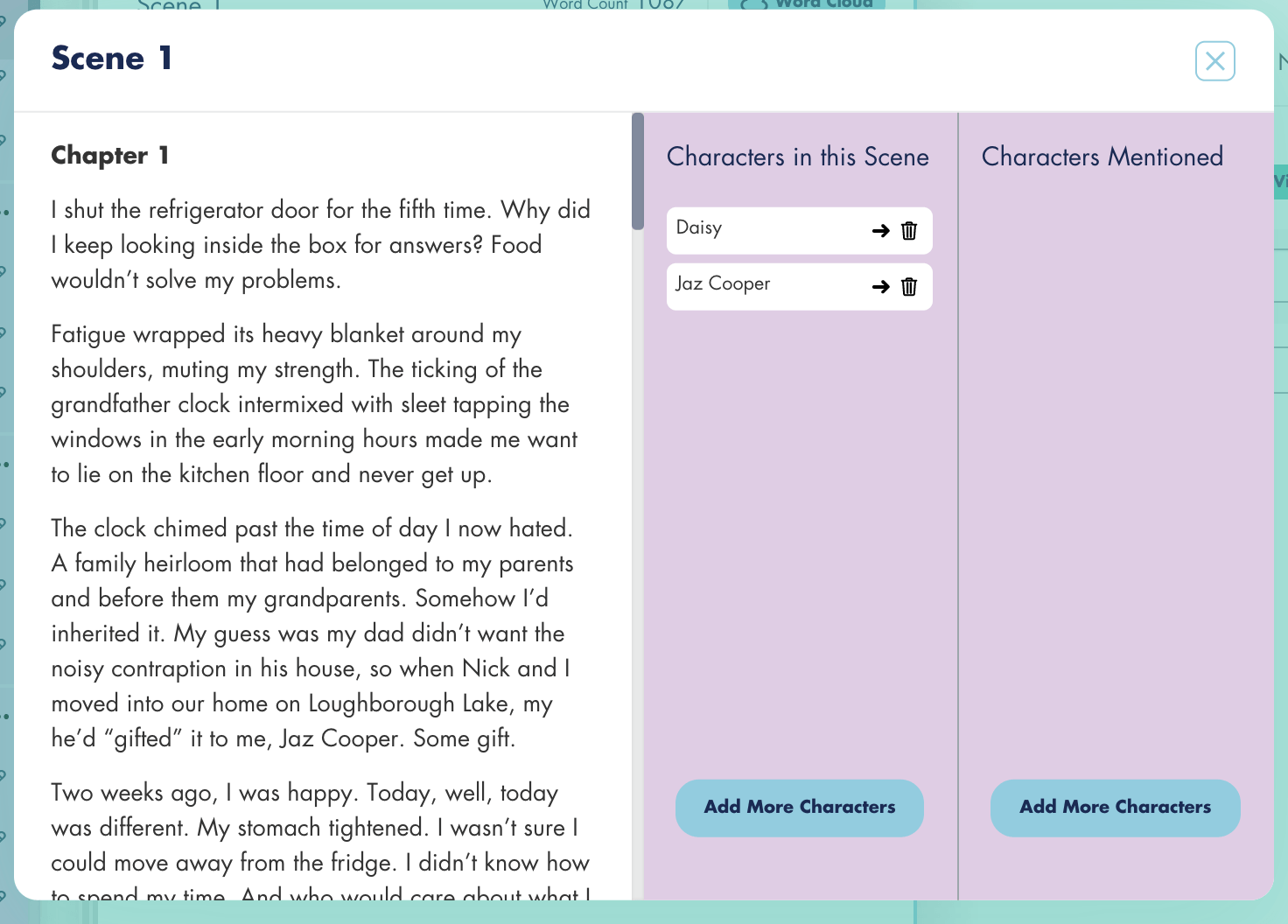 The Scenes per Character, Character per Scene, or the Story Map insights do not display characters moved to “mentioned”.

As you read each scene, update the cast so it’s accurate. You’ll be amazed by how much this helps you remember characters and how they fit into the plot—or not.

If you find names in the list that aren’t characters, go to the Cast of Characters page and delete them from the cast. This will remove the name from lists that are linked to scenes. This will not change the text in the manuscript. 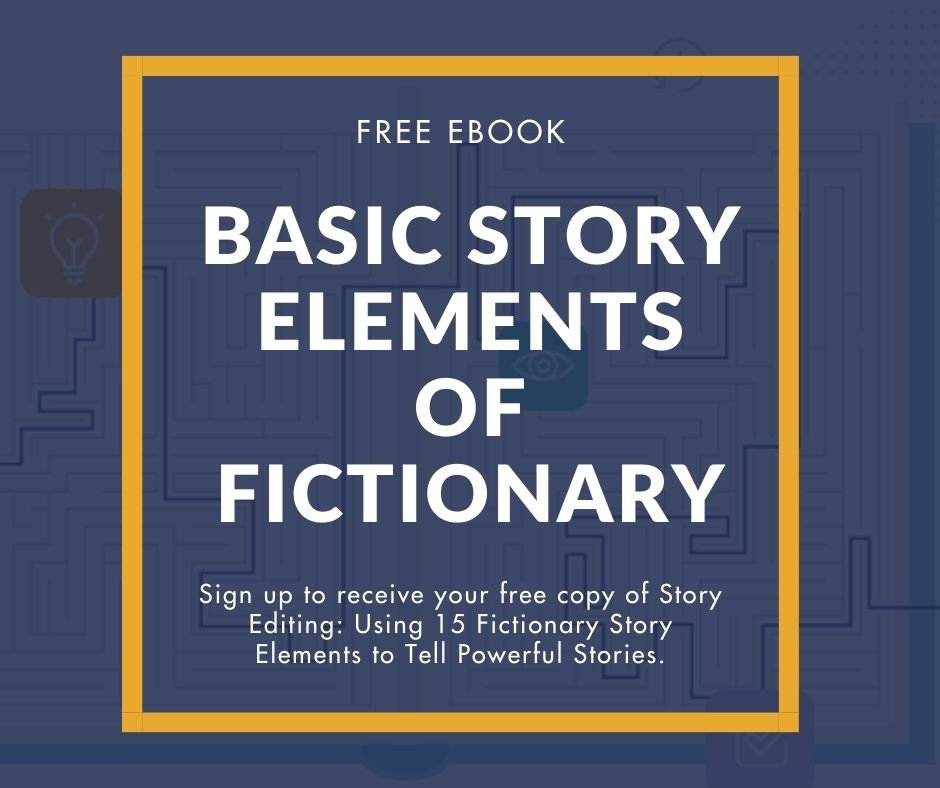 Why not check out Fictionary’s StoryTeller free 14-day trial and tell powerful stories?   No credit card required unless you love StoryTeller as much as we do and decide to subscribe.

Like to learn more about StoryTeller, check out our blog StoryTeller: Creative Editing Software for Fiction Writers.

Make the Most of Your Cast of Characters gives you a deeper look at characters in your entire story.

Why, When And How To Beta Your Book

Sharing your story can be frightening, so I’ve asked the experts at BetaBooks to talk about how t...

The middle of a novel is often the most difficult of the key scenes in the story arc to write. Ac...