Blogs / Make the Most of Your Cast of Characters

Blog / Make the Most of Your Cast of Characters

Readers love to cheer for a character. Make them feel the sadness, the terror, the happiness your character feels, and you’ll keep them reading.

In a novel, giving your readers someone to cheer for and follow for 300 or so pages might make the difference between the reader dropping your book on the coffee table after chapter one and staying awake late into the night reading until the climax satisfies their need to know what happened to the character.

The Cast of Characters is the list of characters in your story.  These characters act and react. They create emotion. They show motivation. Without any of this, you don’t have a story. That’s a tall order for your characters. So how do you make sure you’re getting the most out of them?

The first thing to do is review your Cast of Characters.  This is my cast from an early version of my first novel DESCENT as shown in Fictionary StoryTeller. 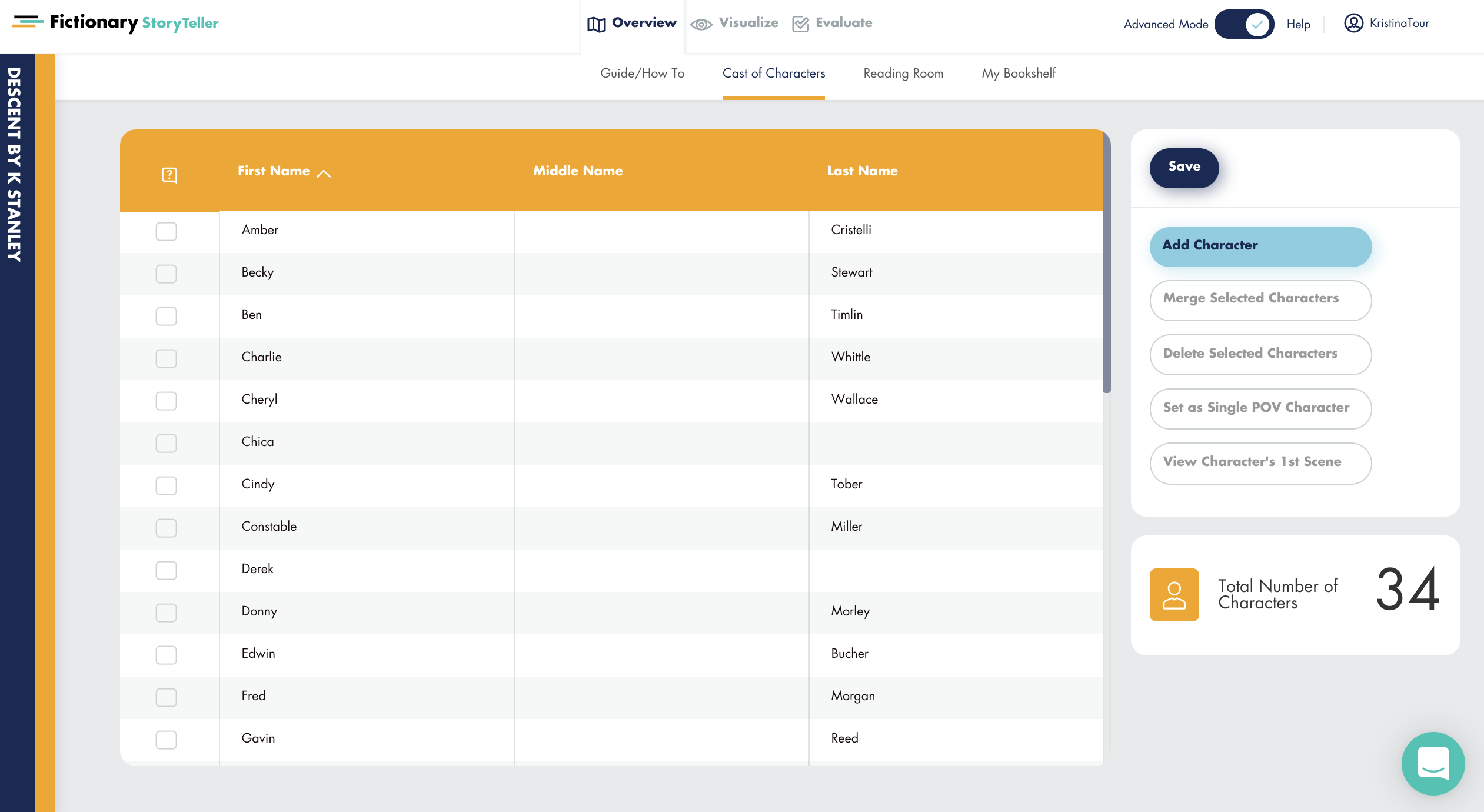 While reviewing your cast of characters look for:

Character Names That Are Too Similar:

Review the names when listed together, and look for names that would confuse the reader by having names that are too similar.  You can see above I have Derek and Donny. These names are similar (both start with D and have two syllables), telling me I should change one of the names.

In a book I was reading, a sheriff and his young deputy are questioning an older woman and a young nurse. The deputy’s name is Molly, and the nurse’s name is Maggie. Both are young women. Both names start with M. Halfway through the scene, one character put her hand on the older woman’s shoulder. I thought, “Why would the deputy be so personal?” I had to reread and check which character touched the woman. Of course, it was the nurse.

This was frustrating. Renaming a character is an easy fix.

Names Used For More Than One Character:

Once, I gave two minor characters the same first name. One was in an early scene, and one was in a later scene. None of my beta readers nor my editor picked this up because the names were too far apart in the story, but StoryTeller did. I was glad I caught this before Imajin Books published my novel.

Viewing your cast of characters in alphabetical order for both first and last names allows you to quickly see any typos. Here StoryTeller has shown me I’d used Ginnie and Ginny for the same person.  It’s a small detail, but one that could cause readers to drop the book.

You don’t want readers to flip (or click) to previous pages to find out who a character is. Too many characters can cause this problem. Here, StoryTeller counted my characters for me. Including minor characters, there are 34 characters in DESCENT. Not bad for a 86,000 word novel.

If you’re worried there are too many characters in a scene, ask yourself if the story needs each character. It’s not your need for the character that matters, it’s the story’s. Can the plot move forward without a character? Then it’s time to cut, cut, cut.

You can also reduce the number of characters by combining two characters into one. Can the role filled by one character be fulfilled by another? If the answer is yes, think about getting rid of the character.

A novel I edited for one of my clients had too many characters. The main character had a best friend who had a wife and two kids. The main character also had a brother who had a wife and two kids. I suggested merging the brother and his family into the friend and his family. This meant rewriting the scenes with the brother (replacing him with the friend), but it also meant a tighter story where the reader had more time to get to know the friend and his family. The author decided to make the changes, and her story is more powerful.

Next we’ll cover how to look at your characters on a scene-by-scene basis.

Are you a visual learner? Watch our 1 minute  video on Cast of Characters.

Download our free eBook, Story Editing: 15 Key Elements of Fiction To Ensure Your Story Works and learn how story editing is all about evaluating the major components of your story.

Two Types of Character Arcs A character arc is either an internal emotional arc or an extern...

Story Editing: Focus on Setting and Tell a Powerful Story

Let’s focus on setting. I once read a book where I didn’t skim any of the setting description....