Blogs / Plot Point 1 In The Context Of The Story Arc

Blog / Plot Point 1 In The Context Of The Story Arc

Plot Point 1 In The Context Of The Story Arc 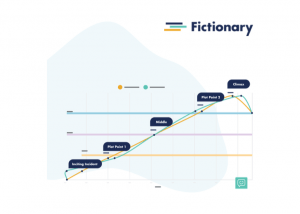 You’re heading into Act II of writing or editing your novel. So how are you going to keep readers engaged? You need a great plot point to drive them forward.

In the last post, I talked about the inciting incident in the context of a story arc. Today we’ll examine plot point 1. The story arc is made up of the Inciting Incident, Plot Point 1, the Middle and Plot Point 2, and the Climax.

What Is Plot Point 1?

Plot Point 1 is the point of no return. The character can’t back out of the central conflict. This is the moment when the setup of the story ends and Act I is over.

But there’s more. There must be something at stake. If the character doesn’t care about the outcome, a reader won’t care either.

Example plot point types (there a many more):

Gone Girl: Amy’s first treasure hunt clue is found. Nick has no choice but to follow it. Amy’s life is at stake (as far as the reader knows).

The Martian: Mark Watney decides he won’t die on Mars. Now he gets proactive. To back out means to die — that’s a lot a stake.

The Philosopher’s Stone: Harry Potter arrives a Hogwarts. He can’t turn back. He can’t get back on the train. That would mean life back with the Muggles and unhappiness.

Twilight: Bella learns what Edward is a vampire, but she loves him and decides to pursue him. Edward has emotional power over Bella.

The story arc is the structure of your story and the timing of the events in that story.

Plot Point 1 should be somewhere around the 25% mark in your novel. If this plot point comes too late, the story will feel like it’s dragging. If it comes too early, the story may feel rushed or lacking in depth.

You can see above, the inciting incident occurs too late in the story.

After that, plot point 1 is reached too quickly, denying the reader story depth. By appearing too early, it also means the middle is dragging. Act II is going on for too long.

I’ll cover other key events such as the midpoint, plot point 2 and the climax in future blogs.

Settings for a Story What are Sensational Settings? Want to learn how to write sensational settings...

3 Reasons To Relate A Character’s Goal To The Plot

Richard North Patterson has some great writing advice. I’d like to take the high-level advice and...