Tension and Conflict. What’s the Difference?

Tension and conflict will keep your reader engaged in every scene. Knowing the difference and when to use each will drive your story forward.

Tension is the threat of something bad happening. This creates suspense.

Tension can be subtle or in-your-face.

Subtle Tension: Imagine one character is hiding a secret that could destroy his life and another character is about to accidentally spill the secret. The reader will feel the tension if you’ve set up the scene so that the reader knows the second character can’t keep a secret.

External conflict is the fight that is actually happening. A physical fight, an argument, a battle to win a race.

Conflict can also be subtle or in-your-face action.

Subtle Conflict: Imagine a couple having dinner with friends. The wife is describing an event that happened in the past. The husband says, “Honey, that’s not what really happened.” The wife grits her teeth and smiles. She re-tells the story the way her husband wanted it told. She’s angry but hides it from others at the table. There is a silent argument going on between the couple.

In-your-face Conflict: Imagine that same couple having dinner in a restaurant. The woman knows her husband is having an affair but hasn’t let on she knows. The husband’s mistress enters the restaurant, and he winks at her. The wife loses control, grabs her drink, runs at the mistress, and throws it in her face. She attacks the woman and knocks her to the ground. That is direct conflict.

Do You Have Tension or External Conflict in Every Scene?

Use conflict and/or tension in every scene and keep your reader engaged. You don’t need both in every scene, but you should have one in each scene.

Your challenge is to ask yourself if every scene in your novel has tension or conflict.

How does your manuscript measure up? Are you using tension and conflict to your advantage?

How Fictionary Can Help You

Fictionary StoryTeller is an interactive web app for self-editing fiction that helps writers turn a first draft into a story readers love.

Below is the opening scene from Look The Other Way by Kristina Stanley – me:)

The “Conflict” in the scene is between an employer (Veronica) and employee (Shannon). Veronica is getting fired and Shannon argues against it, trying to keep her job.

The “Tension” in the scene occurs when Shannon is in the middle of being fired and she worries about how to tell her fiancé. They are just about to buy a house and need her income. The tension also foreshadows there will be problems between Shannon and her fiancé. A double use of a Fictionary Story Element will make your story stronger.

The question marks in Fictionary contain information about each Fictionary Story Element and how to use the elements to make your story better. 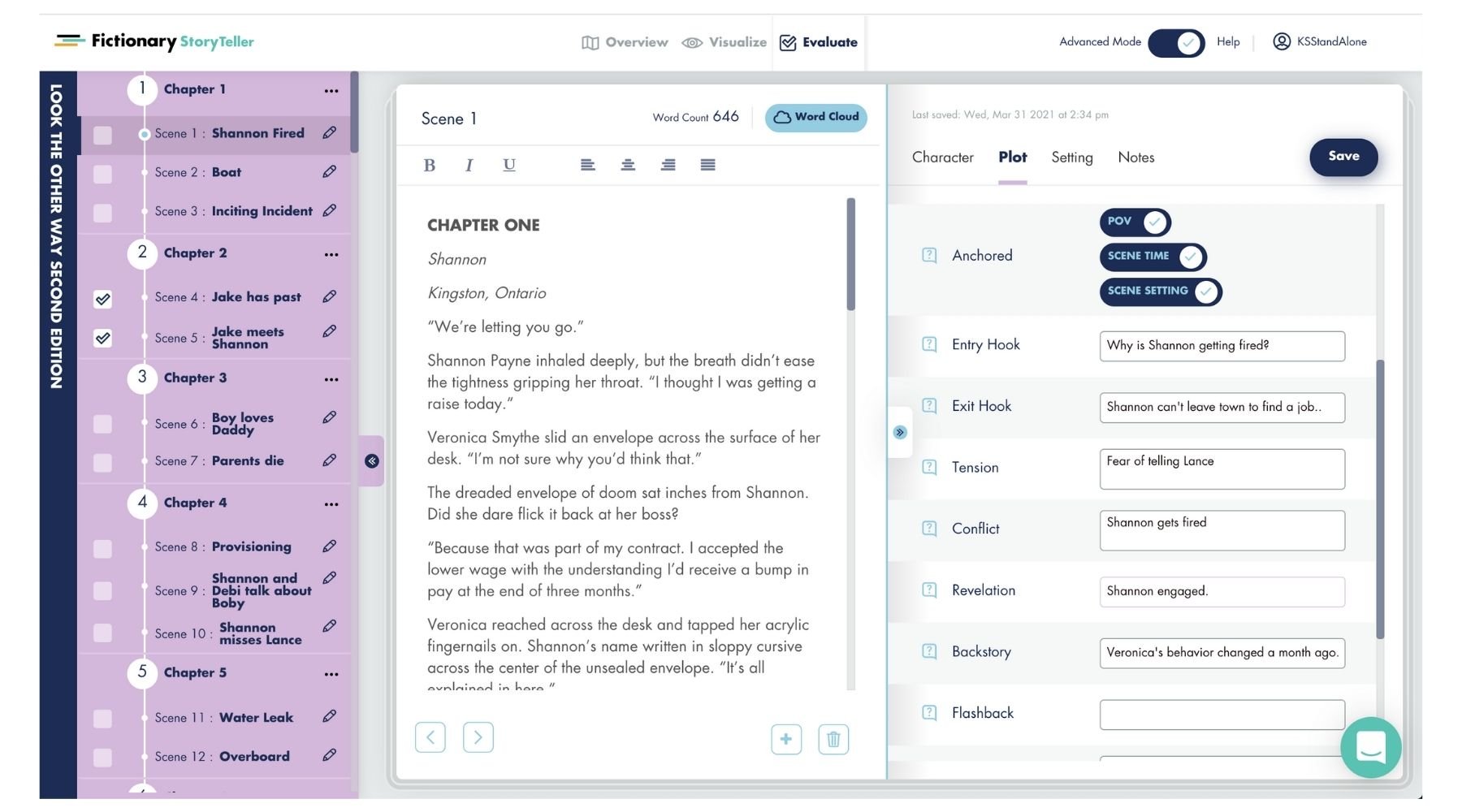 When you subscribe after your two-week free trial, , you get the Fictionary Story Editing Masterclass for free.

Kristina Stanley is the best-selling author of the Stone Mountain Mystery Series and Look The Other Way.

Luzifer-Verlag published Abwaerts (Descent) in Germany in the fall of 2017.

Her short stories have been published in the Ellery Queen Mystery Magazine and The Voices From the Valleys anthology. She is the author of THE AUTHOR’S GUIDE TO SELLING BOOKS TO NON-BOOKSTORES.

Her short story, WHEN A FRIENDSHIP FAILS, won the 2014 Audrey Jessup with Capital Crime Writers.

Kristina is the CEO of Fictionary, and all of her books were edited using Fictionary.

How Many Scenes in a Chapter? And How do You Evaluate it?

How many scenes in a chapter is the right number? And why is that number important? A scene or seve...

How to Become an Editor and Be Amazing

To become a story editor is not easy. You owe it to writers to learn how to edit a story before you...