Blogs / Why Characters per Scene are Important for Story Editors

Blog / Why Characters per Scene are Important for Story Editors

Why Characters per Scene are Important for Story Editors 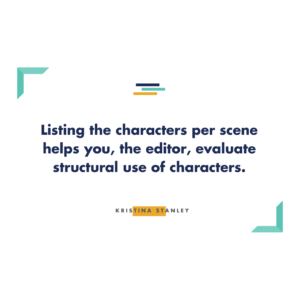 One of the most important services you can offer a client is to get to know the characters in their story. You’ll evaluate the story based on the characters and how they relate to the story.

So let’s get into detail.

The moment a character enters a story, their character arc begins.

The first time a character appears, they must be introduced to the reader. This is where you as the editor evaluate how much time was spent on describing the character. Ask yourself, was the description the right amount for the importance of the character in the story.

For a major character, the writer should place more emphasis on introducing the character.

For a minor character, the writer should describe as little as possible and still keep the reader engaged and not confused.

When describing a character for the first time, the writer should describe the character so the reader:

Review how a new character is presented. Consider their appearance, how they speak, what their mannerisms are, their actions, and how they interact with other characters. Also, consider whose eyes the new character is being seen from and check if the description something that character would think or feel.

For example, a rough and tumble character might look at a banker from a city and sneer at the manicured fingernails, whereas a pedicurist might look at the same character and be impressed with the care the person takes in their appearance.

The last scene for a character in the story is the end of the character arc.

The more time a reader spends with a character, the more time they have to connect with that character. If there are too many characters, the reader doesn’t get enough time with the important characters.

Mark the scenes within the story where you think there are too many characters and make suggestions on how the writer can reduce the number.

Review the list of characters and look for names that are too similar to each other. Names that start with the same letter, have the same number of syllables, or end with same letters can confuse the reader. Tell your writer if this is the case and make suggestions on how they could fix the issue.

Keeping track of characters, means knowing if the main characters are in the key scenes.

With a list of characters per scene, you can look for the following issues:

1 Protagonist not in the key scenes:

2 Protagonist and Antagonist Together:

If there is a lack of tension in the story a writer and put the protagonist and antagonist in the same scene.

These few actions will help you get to know the characters and make specific recommendations to your clients.

Read Why Naming Each Scene is Important for Story Editors

Ready to take your editing to the next level?

And there’s more. The Fictionary Certified StoryCoach training is available.

If you’d like to take the training, send me (Kristina) an email at [email protected] telling me why you’d like to become a Fictionary Certified StoryCoach, and I’ll give you a discount.

We developed this training for two reasons.

For more on story coaching check out:  What is a Story Coach?

Introduction Editing makes a story the best it can be by revising content, fixing errors, and ensur...

How to Write a Novel

How to write a novel is a question I’m often asked. We’re going to use Gone Girl...