Blogs / What is a Character Arc?

Blog / What is a Character Arc? 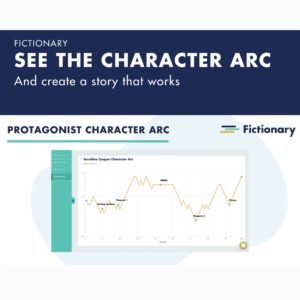 The protagonist is the main character of a story. Depending on the type of story you’re writing, the protagonist either wins or loses. They achieve the main story goal or they don’t. And that win or loss must affect them.

Every scene in the story must impact the protagonist in a positive or negative manner even if the protagonist is not in a scene. This mix of positive and negative impacts will take them closer or farther away from their story goal until they finally win or lose in the climax scene(s). 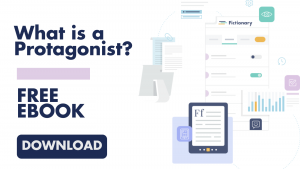 This is called the external character arc because the events of a scene push the protagonist toward or away from their goal. The character may have any kind of setback. These include events such as:

If a scene does not impact the protagonist or their main story goal, it might not be needed in the story.

An internal character arc is the emotional journey your protagonist takes throughout the story that engages your reader. Within Fictionary, you can keep notes of this in the Impact on Protagonist Story Element. A reader wants to experience emotion. If a character doesn’t experience emotion, then the reader won’t either.

The external character arc begins in the first scene of the story, even if that scene is a prologue or the protagonist is not in that scene.

If you pay attention to the impact every scene has on the protagonist, your story will be stronger.

At the end of every scene, ask yourself:

Just like the Story Arc, it’s important to draw the external Character Arc. You can do this within a spreadsheet or on a whiteboard.

Within Fictionary, the character arc starts to draw once the Protagonist Character Arc element is set on the Evaluate page.

If the Story Element is set to: 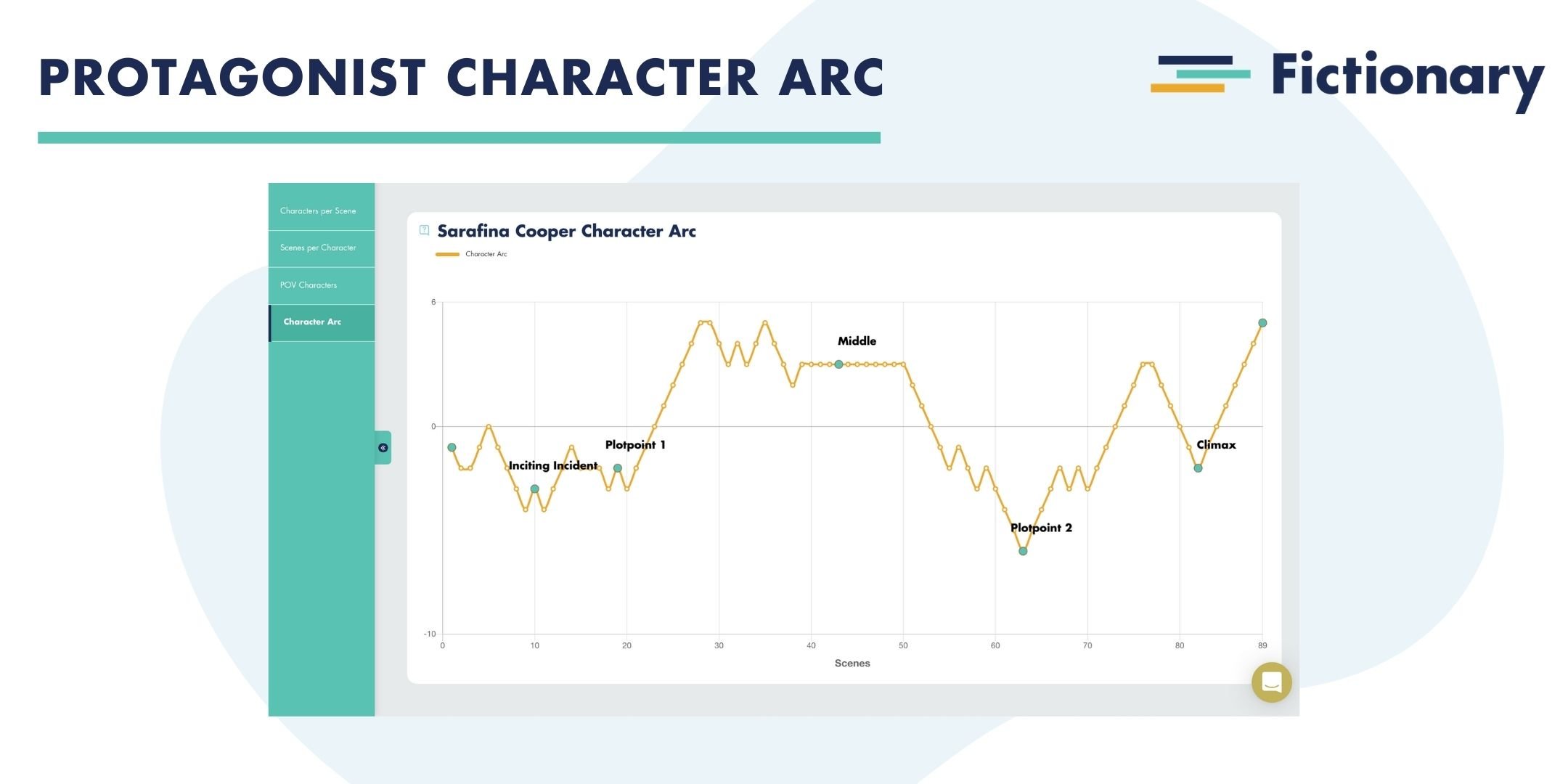 The Story Arc and the External Character Arc

The inciting incident is the moment the protagonist’s world changes in a dramatic way.

Plot Point 1 is the point of no return. The character can’t back out of the central conflict. This is the moment when the setup of the story ends and Act I is over.

Let’s face it. If any one of us changes our lives and can’t return to our previous life, we’re going to feel or act differently when that happens. Your protagonist must too.

The middle is when the protagonist changes from reactive to proactive.

Here again, the protagonist is going to change their behaviour, and the only way that happens is if their emotional state changes, which means something has caused that change. And we’re back to does the scene impact the protagonist.

Plot Point 2 will be a low point for your protagonist. Her actions since the middle have caused disaster. At plot point 2, she becomes more determined to reach her goal.

Note the word disaster in the description. That tells you the scene has a negative impact on the protagonist.

You’ve built your story up to the climax with rising action, and now the climax scene (or scenes) will have the highest level of conflict, the greatest tension, or the most devastating emotional upheaval.

Depending on the type of story you’re writing, the protagonist either wins or loses. They achieve the main story goal or they don’t. And that must impact them. Let me repeat that. The climax scene MUST impact the protagonist.

Too Many Negative Endings

For a compelling external character arc, scenes can’t end with the protagonist in a negative state compared to the beginning of the scene for too many scenes in a row. The reader will start to believe the protagonist will never reach their plot goal and what’s the point of reading the story. There has to be a hint that the protagonist can succeed.

Too Many Positive Endings

Too many scenes in a row where the protagonist’s state is better at the end of the scene than at the beginning will bore the reader. If the character reaches every goal too easily, the story will lack tension.

There’s no way around it. To create an external character arc that drives the story forward, you’ll evaluate every scene and keep track of whether the scene impacts the protagonist in a negative or positive manner.

Have fun reviewing the character arc!

Free eBook: What is a Protagonist? 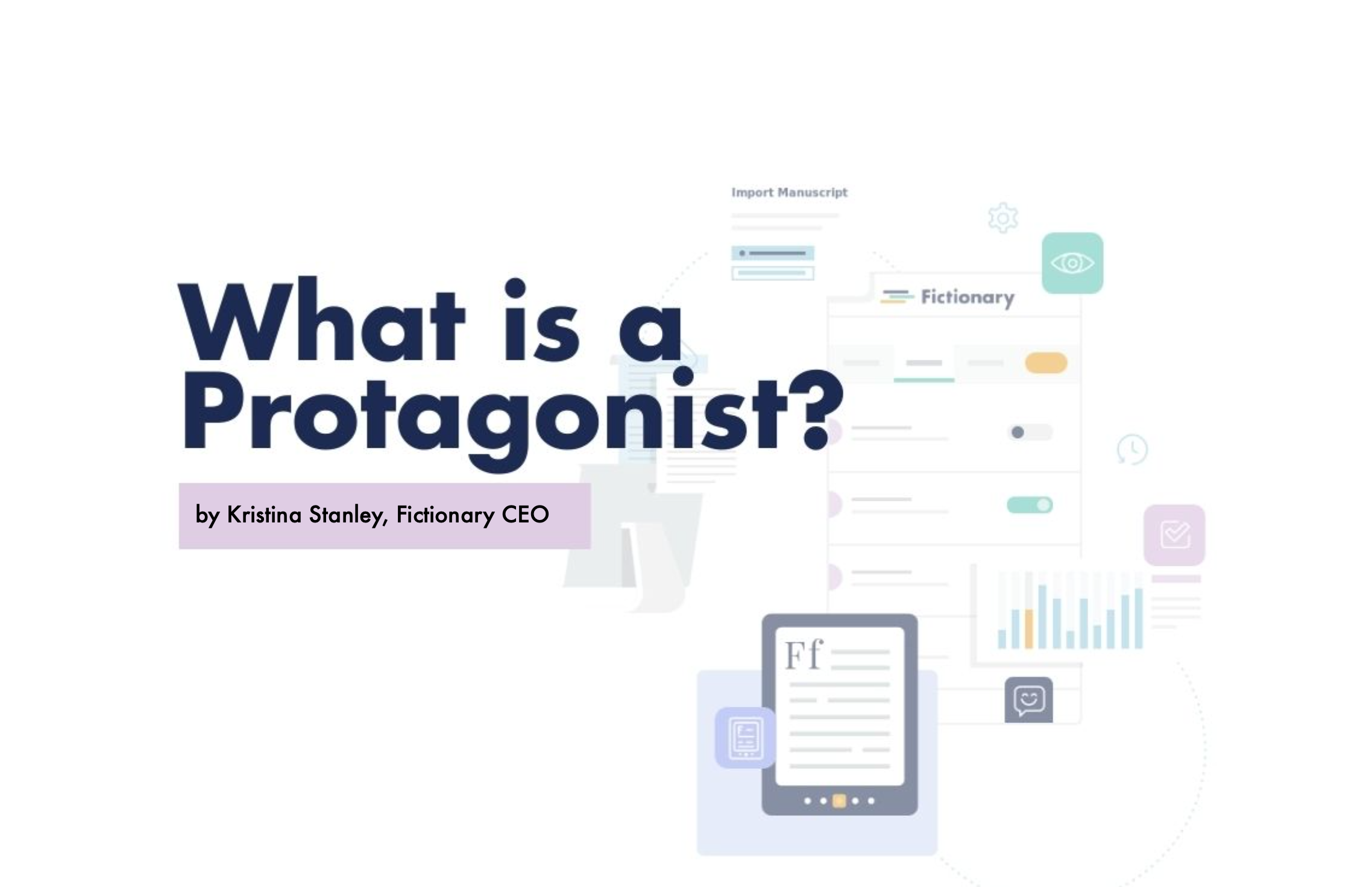 When you subscribe after your two-week free trial, you get the Fictionary Story Editing Masterclass for free. That’s a $99 USD value. 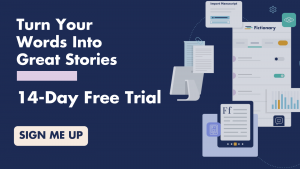