Blogs / Overcome your writer’s block with Elements of a Story

Blog / Overcome your writer’s block with Elements of a Story

Overcome your writer’s block with Elements of a Story 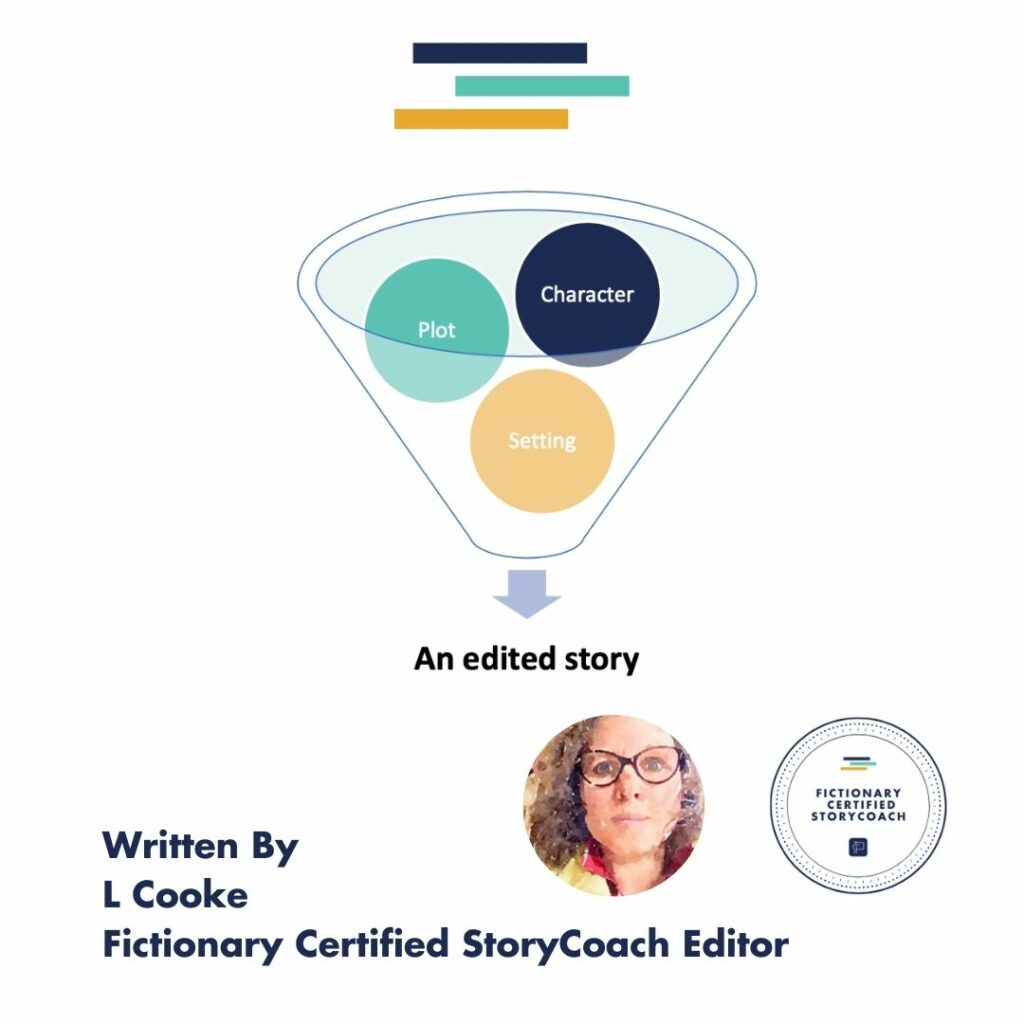 Stories matter. Your story matters. But, and it is a big BUT, your fingers stumble, they fumble, they refuse to work when you sit down to write, or type, or chisel each word you want to get out. Have you got writer’s block? Maybe you are in denial; you have a first draft, after all. Maybe you are wallowing; you are searching social media for the perfect something that will unblock you. Or maybe, just maybe, you have found your answer: Fictionary’s elements of a story.

Everyone’s writer’s block is different, but most blocks really are down to a lack of confidence. A lack of confidence that your editing will turn your fantastic story idea, and your first draft, into a solid gold story. The great news is that working in Fictionary, implementing the elements of a story on a scene-by-scene basis: your fingers will be typing, writing, or even chiselling “The End” in no time flat.

What—a simple solution to writer’s block? What alchemy is this?

Remember, stories matter. Matter is made up of elements. Elements of a story matter; Fictionary knows this.

What is an element of a story?

The 3 super groups of Element of a Story are: 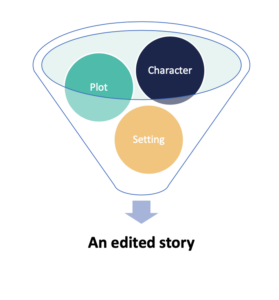 Character —Who the story happens to

Plot —What happens in the story

Setting —Where the story happens

How you mix up these 3 super groups, that is how you make your writer’s voice unique. And these 3 main story parts break down further into 39 elements of a story.

Here are those headings from Fictionary, from the evaluate page.

Before we look at the Fictionary Table of Story Elements, let’s understand why you need to sort them out in every scene. Your story will feel flat to a reader if any of the story elements are missing, as Jessica Majewski so brilliantly explains. And a flat story never comes to life to your reader, and your reader will put your book down, and your reader might think twice about buying any of your future books. Fictionary does not have just 3 elements of a story, not just 7, not just 9: Fictionary now has 39 unique elements of a story. Are you ready to see the super organised Fictionary Table of Story Elements?

And that’s why Fictionary is revolutionary. Fictionary software, with the aid of AI, has the most thorough checklist of elements of a story around. Below you can see Fictionary’s interactive Table of Story Elements. 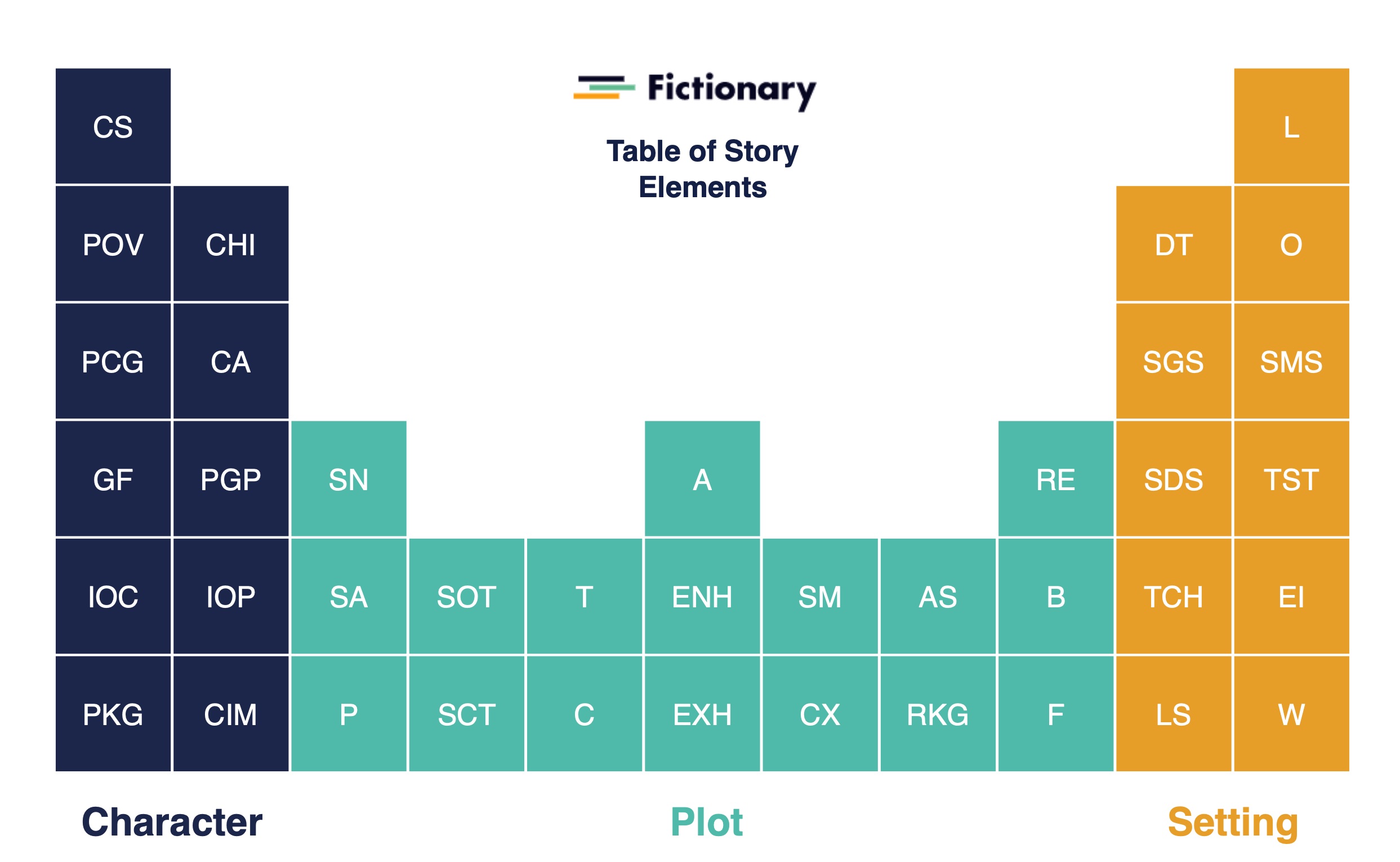 When you click on each element, it will take you through to the video shorts or articles explaining what each element is.

How these Story Elements look in Fictionary 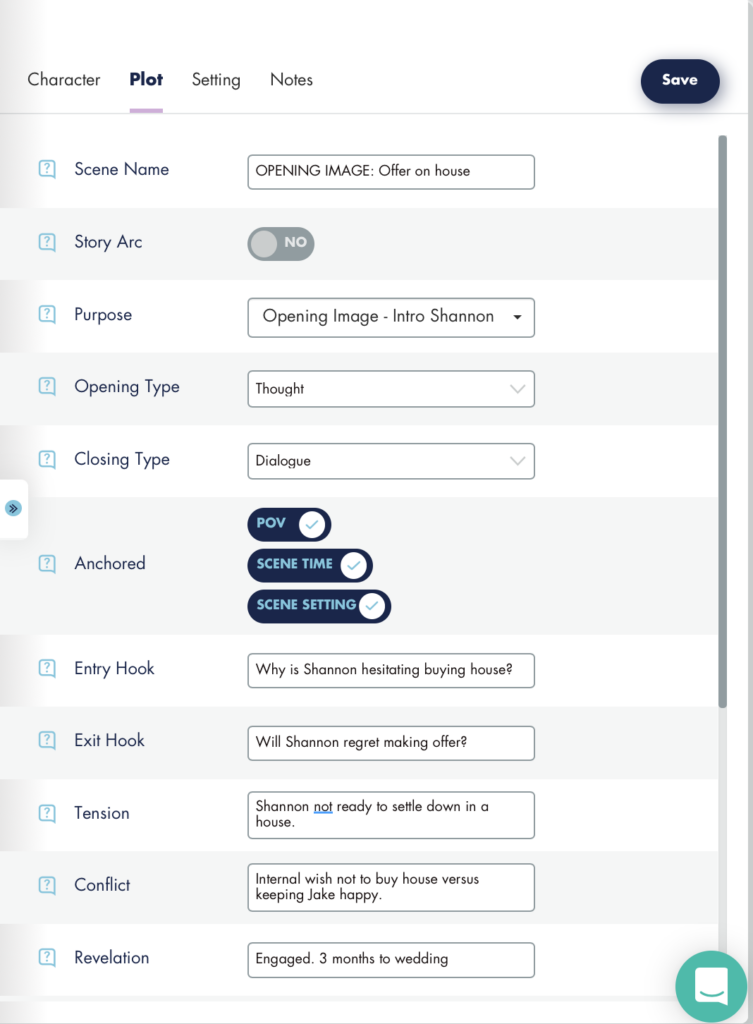 That’s how easy Fictionary is.

And writer’s block is ripe for retirement—now that Fictionary’s here.

Elements of a Story Bingo

Shall we play Bingo with the elements of a story? I will pick one element from Character, one from Plot and one from Setting, at random, to show how experimenting with each element of a story transforms the scene. We are going to play with a scene using whichever element of a story comes out of the 3 colour-coded bags.

I pulled out POV (Point of View), Conflict and Emotional Impact of Setting. 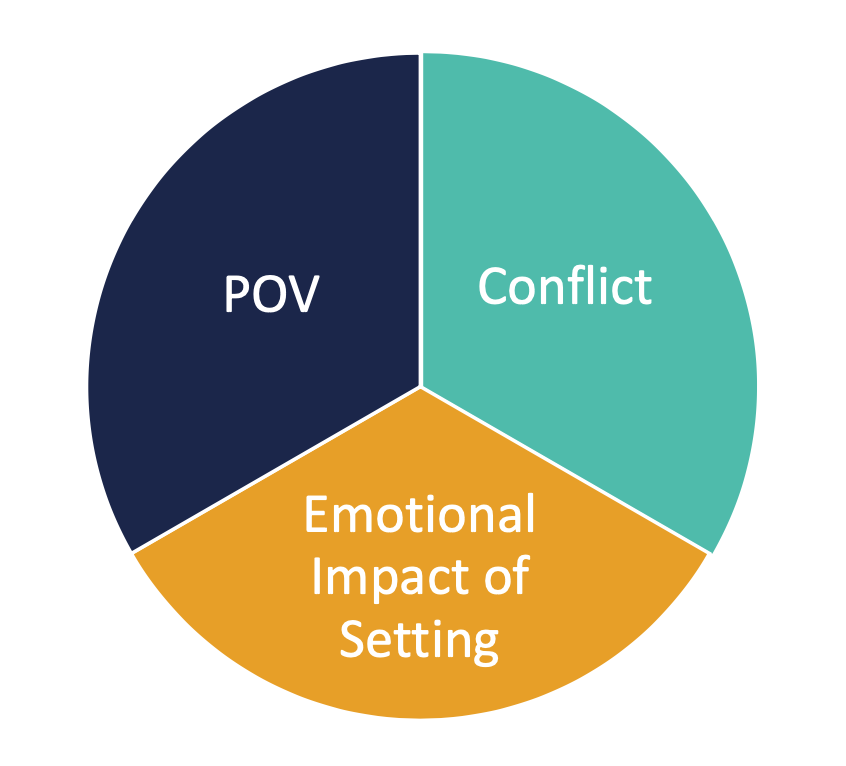 And we are going to have a play with the following scene:

Write: 200+ words about a 48-year-old who goes back to her/his/their 30-year high school reunion, to confront someone.

Here are a few ideas, but feel free to choose any of your own. Remember, just to change the POV, the Conflict and the Emotional Impact of Setting. 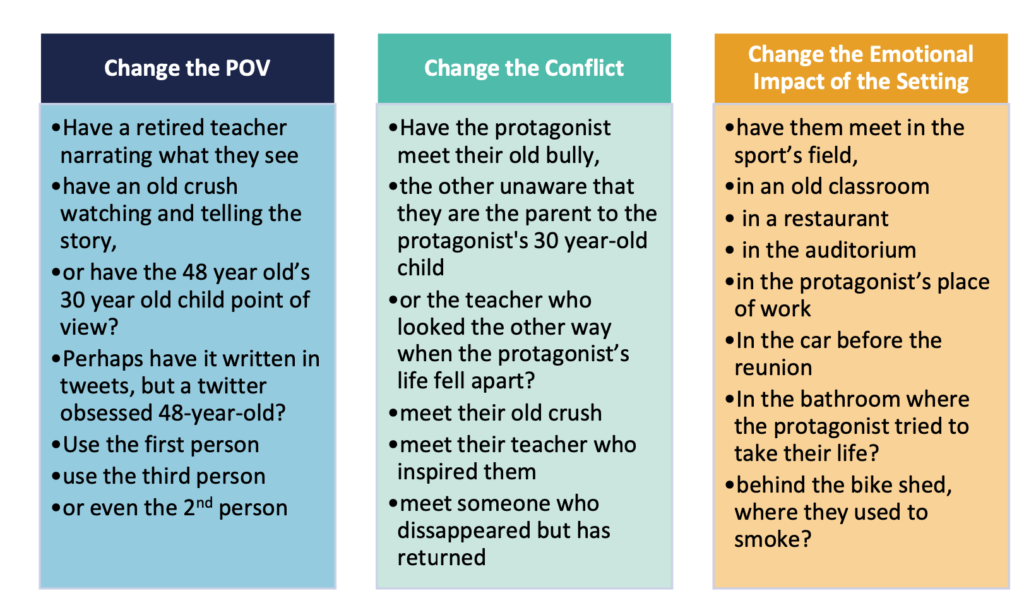 Each time you change one element of story, the whole story changes, sometimes for the better, sometimes not so much. But the key is to have fun.

And when you edit, you are looking to experiment to make each scene come to life.

Next, take one of your scenes from your work in progress. Any will do, perhaps even one you feel is weaker. You don’t have to tell anyone; that will be our secret. Try rewriting the scene from someone else’s POV or change it from 1st person to 3rd person. Just to get the feel for it. Or try to change the conflict in the scene. Or try to change the setting to somewhere that triggers the protagonist, the worst place possible for that scene to happen. See how your protagonist reacts, your antagonist reacts.

Have any of these changes made your scene come to life? Made you, as the writer, enter that wonderful writer’s trance, where you are fully interacting with your written world? Are you crying or laughing or wide-eye-wondering along with your protagonist? Then, you know you’ve hit story gold. BINGO! All by using Fictionary’s elements of a story.

So, what are you waiting for?

Fictionary’s beauty is that with each scene you can safely experiment. Like a story chemist should. Those experiments unblock your writer’s block. Have fun with all the elements of a story, and that will shine through in your writing. Fictionary is the place to do this, since Fictionary is the safest place in a writer’s experimental editing universe. 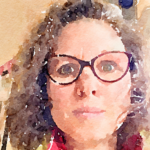 Whether you’re a plotter or a panster, you’ve completed a first draft. Congratulations! Now what? If...

What is the Point of View in a Story, And How to Get it Right

Are you writing your first draft during NaNoWriMo this November and wondering what to do next? To il...